The global logistics industry has developed an impressive array of hardware designed to automatically sort goods for a customer order or for a specific destination. The problem for Australian companies is that this hardware is almost inevitably...

We have a long list of very happy clients, both large and small. Here is a short list of some of the larger companies that we’ve done work for:

Each of these companies presented with a particular challenge, and we delivered customised solutions to meet all of their goals.

Talk to us about your challenges, we’d love the chance to win your business and add your company to this list. 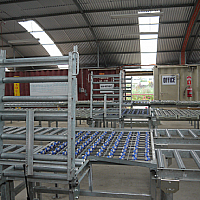 Are YOU utilising manual handling aids yet?

Often this type of manual handling process is seen at remote sites and so the processing of core samples in trays presents its own unique set of problems to the processing staff.

Invariably due to site conditions, heavy core trays (usually of considerable size and weight) will, in general, be handled by core sampling staff through purely manual means.

This manual processing poses some considerable problems in simple logistics as well as to the operator’s mental and physical wellbeing, some of which are:-

In recent years, a lot of work has been undertaken by the various tray manufacturers in delivering newly designed trays that are lighter and more readily handled. Older style metal trays have in a lot of cases been replaced by moulded polymer trays with removable inserts which can be designed to stack and store more readily.

Furthermore, important work in other areas that minimises the majority of the strenuous manual labour requirements has been achieved by the inclusion of static roller beds and other manual handling aids within the core sampling areas.

These static roller based manual aids, provide operational improvements by assisting “flow” and provide much better area utilisation within the core processing sheds, or to the core library. Pieces of equipment that can make tasks of a manual labour intensive nature (such as the movement of core trays) effortless are invaluable and are now readily available.

Moreover, this type of equipment has the added convenience of being able to change direction easily and to facilitate transfer between storage lanes. This equipment can be sourced in a number of configurations to suit all applications.

In addition to this, hardware that is usually operated on a level plane can be supplemented with equipment that allows for elevation change between levels or which can be supplied to assist with loading / unloading applications.

Each core sampling site is different and requires considerable thought when designing a suitable route plan. – Consideration may well be made to engage a specialist to give advice on layout design as well as hardware recommendations.

Adept is one Australian manufacturing company that not only manufactures the broadest range of conveyor based core tray handling aids for use in core sheds, it also has an in-house design team that can consult and advise on the clients individual plans.